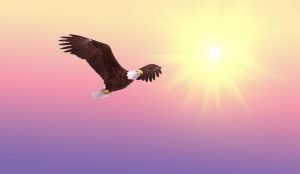 Today is TGIF! Here is your “Funny Friday” humor:

A man goes on vacation to the Holy Land with his wife and mother-in-law.

They go to an undertaker who explains that they can ship the body home, but that it’ll cost over $5000, whereas they can bury her in the Holy Land for only $500.

The undertaker asks, “Are you sure? That’s an awfully big expense and we can do a very nice burial here.”

The man responds, “Look, 2000 years ago they buried a man here and three days later he rose from the dead. I just can’t take that chance.”

One of the most inspiring sights in nature is the eagle in flight. With an endless expanse of blue behind it the eagle spreads its mighty wings and soars majestically and gracefully across the sky. Free, powerful, complete. Because of this the eagle becomes a symbol for how we’d like to be. We all want to soar like an eagle in life.

But I wonder if you know how it is an eagle learns to soar? I am told that there is a particular species of eagle which builds its nest high up on the face of a cliff overlooking the sea. In this nest the eagle chick is hatched and spends its first days watching its mother come and go, collecting food and bringing it back.

One day mom decides it’s time her chicks learned to fly. You know how she does it? She forces her way right into the nest and then pushes her chicks out. The chick starts plummeting down the cliff-face, terrified, shocked, heartbeat racing, aware that death is just seconds away. And then something amazing happens. The chick instinctively stretches the wings it never knew it had, the plummet becomes a fall, then a gentle rise. Soon the chick is soaring like its mother.

So remember: If you are facing a new challenge or being asked to do something that you have never done before don’t be afraid to step out. You have more capability than you think you do but you will never see it unless you place a demand on yourself for more.