Dr. Rick Greco, director of medical education for Trinity Health System’s internal medicine program, spoke with WTOV9’s Chloë Mesogities about the growth of the system’s emergency and internal medicine residency programs. That news report can be found here. “Really my goal in bringing medical education to this area is to change the culture of the practice of medicine, to raise the bar to a very high standard of practice,” Greco told Mesogitis. 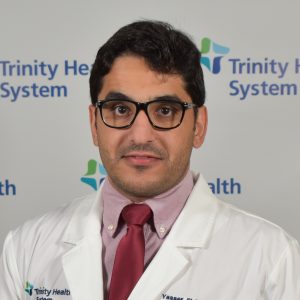 When the program began in 2019, the expectation was that Trinity Health System would have 35 to 40 residents once it was fully operational. Currently, the number stands at 54 residents, and next summer, the program will celebrate its first graduating class. “The program here is helping,” said Yasser Eldaour, second-year internal medicine resident. “The education is a lot…we’re receiving a lot of education: morning reports, noon
conferences, didactics.”

Each residency lasts three years, and as Dr. Greco told the Herald-Star at the time of the program’s launch in 2019, studies have shown that “50 percent of residents end up practicing within an hour of where they trained.” Eldaour, who hails from Saudi Arabia, is one resident who is hoping to remain in the Ohio Valley after he graduates, and he told WTOV he’s not the only resident who feels this way. “They’re thinking in the same way that I’m thinking,” he said. “I want to come back and give for this community. You feel welcomed, and you want to give back.” Dr. Greco has modeled this value of physicians giving back to their communities throughout his 30 years of practice. He was director of medical education for the residency program at Ohio Valley Medical Center, which closed in September 2019, and has been one of the driving forces behind the success of Trinity Health’s residency program, which he believes has made Trinity Health System “a stronger medical center.”

“It’s something I’d like to give back to the community,” Dr. Greco said, “…for generations to be able to say that we have good medical care that we are training in this Valley and will continue to make medical care for our community in the future.”